What better metaphor for the ups and downs of Belfast than the Titanic, 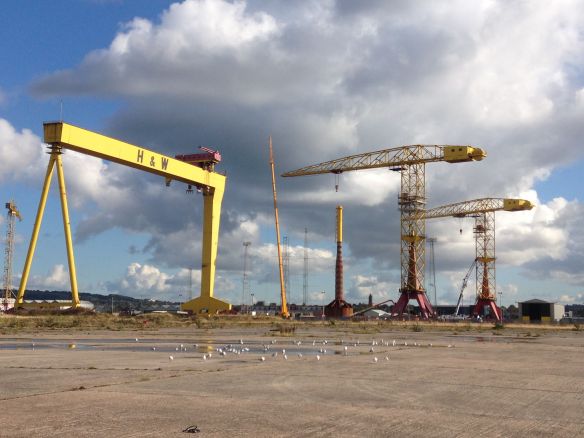 a marvel of Victorian engineering that sinks on its maiden cruise, killing over 1500 people, than is resurrected, metaphorically, via a museum and restoration of its dry docks and ship yard in the aptly named “Titanic Quarter” of the city.

Our day started with a visit to the St. George’s Market, a Friday and Saturday tradition that draws people from all over the city and the surroundings areas. Food, knick-knacks, more food, lots of people having a good time, food, etc. 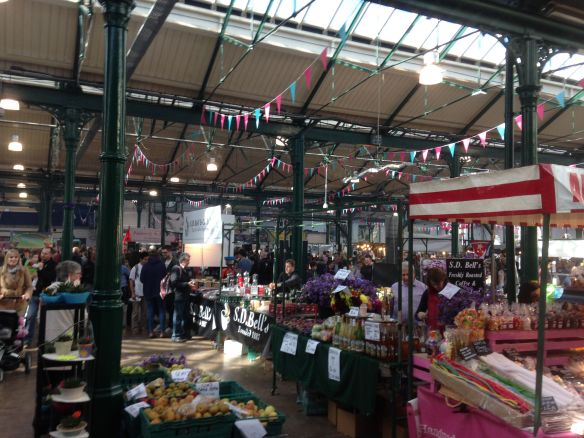 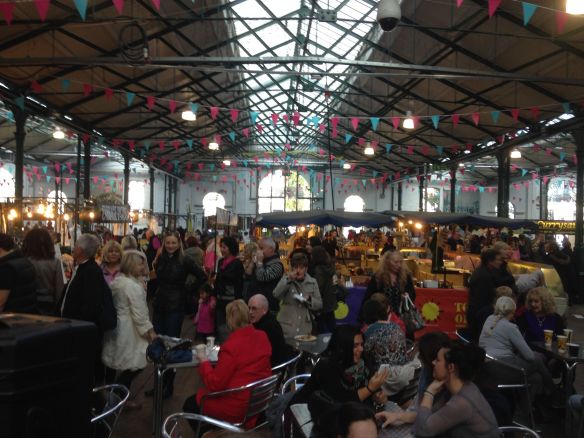 We stoked up for the 2-3 mile walk to the Titanic Quarter. It was a sunny but breezy day and the views across the River Lagan were clear and dramatic.

The first site in the Quarter is the Discovery Centre, a museum specializing in marine science, partly supported by James Cameron, no doubt using some of the massive fortune he made on the Titanic movie. We skipped the Centre — it was somewhat pricey and we were more interested in the restored Titanic sites.

The next site includes the cranes overlooking the old shipyard (see photo above). After that was the Thompson Dry Dock where the finish work on the Titanic and its sister ships was done and where they were repaired and maintained. The dry dock and the pump house that pumped millions of gallons of water out in about an hour and a half are impressive, especially in the context of the times. It is a testament to 19th Century engineering. We were able to walk down into the dry dock along the wooden blocks that supported the keel of the boat. Maybe its because I was an engineer at one point in my life, but this was one of my favorite sites in my two extended visits to Belfast (click on link to read about my last visit).

We finished off the day by finding a strategically placed table right in front of the stage at John Hewitt’s for dinner, beer, and most important, for Katherine at least, traditional Irish music. As much as I love prisons, execution chambers, and rainy weather, this was my favorite day in Belfast, as well as my last.

The next day I headed to Killarney for the 11th annual Summit of the Adventure travel Association. Katherine stayed in Belfast for another day, and then was off the Derry for a few days on her own. More on that later.