This visit to Big Bend has been the best of my three visits since I first came here almost 40 years ago. In 1976 I discovered the park while seeking an escape from the steamy weather, dreary concrete towers, beehive hairdos and polyester pants suits of suburban Houston, where I taught at a campus of the University of Houston for an otherwise forgettable two years.

My second visit in 1991 was even better. I drove down from Denver, where I was working on a consulting project, and went on a two-day backpack in the Chisos Mountains, among other activities.

There are reasons why this was the best. First, I was accompanied by my wife, Katherine. Second, we were hosted by Mike Davidson, an old time Texas river guide who is now the Executive Director of the Brewster County Tourism Council. For three days Mike showed us around, arranged a variety of activities that showed off the best features of the park and its environs, and entertained us with stories about the area, his past, and the ins and outs of Texas politics.

Mike joined us the first night for dinner at the historic Gage Hotel in Marathon (see blog post for February 3), just an hour drive from the park, then showed us around town the next morning. Marathon used to be a railroad town during the boom years in the late 1800s when ranching dominated the West Texas economy. It is now reinventing itself as a tourist stop on the way to Big Bend and a scenic escape for residents of the “oil patch” (Midland – Odessa) a few hours to the north and west.

Marathon is pretty small so we covered most of it on foot in a just a few minutes, before getting side tracked at Eve’s Garden B&B, a fantasy land of crazy shapes, bright colors and lush gardens. From there it was a one-hour drive on a lonely two lane blacktop through a landscape that looked more like the surface of the moon the closer we got to the park.

Our destination for the first two nights was Chisos Mountain Lodge, a sprawling collection of low-slung wooden buildings in a basin surrounded by sharp volcanic peaks and broad monoliths of red rock. The weather was cold, drizzly and dark so we didn’t do much our first afternoon in the park except take short walks, read and nap. The second day was much better — clear, bright and crisp in the mountains, but foggy on the floor of the park. From up high in the mountains, the morning fog added yet another dimension to the scenic landscape as puffs of mist filled the gaps between the jagged spires of rock and rounded buttes. 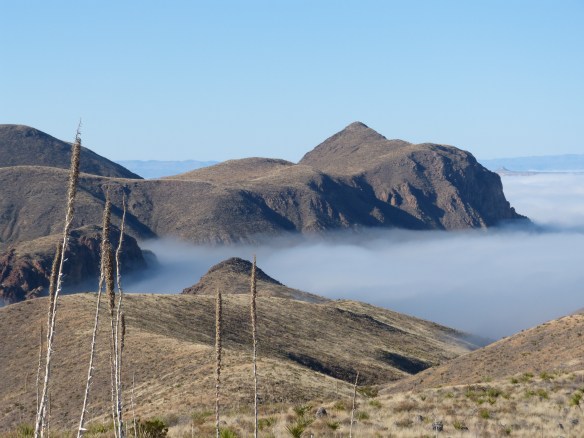 Mike met us after breakfast and we headed down into the fog to drive to the far western edge of the park to Santa Elena Canyon. The fog soon lifted reminding me of why I love driving through Big Bend. The roads are straight, well paved, and offer long sweeping views of mountains and wind- and rain-sculpted rock formations in all directions. It takes pretty much an hour to get to most sites, but its usually an easy, enjoyable drive that provides lots of opportunities for gawking and day dreaming.

We reached the Santa Elena Canyon parking lot about 9:30. Maybe the fog discouraged morning visitors or maybe it was the combination of the vastness of the park, how few visitors it receives compared to other National Parks, and the remoteness of the Canyon, but the lot was empty. We had the place all to ourselves.

A short walk across a sandy beach took us to the edge of the Rio Grande, which at this point is shallow and narrow. All of the communities, ranches and farms along its winding route from the mountains of Colorado to the Gulf of Mexico draw water from the river, so this rio is not so grande by the time it winds through Santa Elena Canyon. In fact, most if not all of the water flowing by is actually from a river in Mexico that meets the Rio Grande in El Paso. 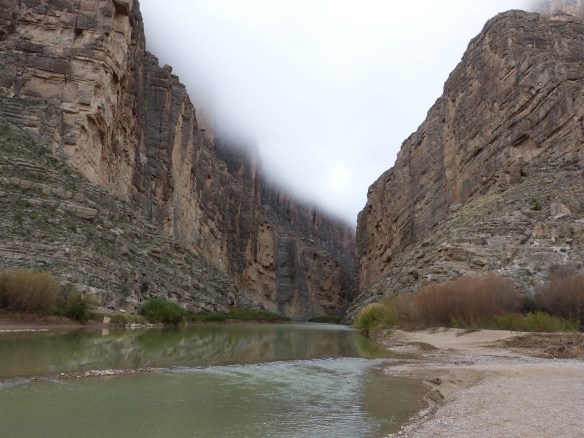 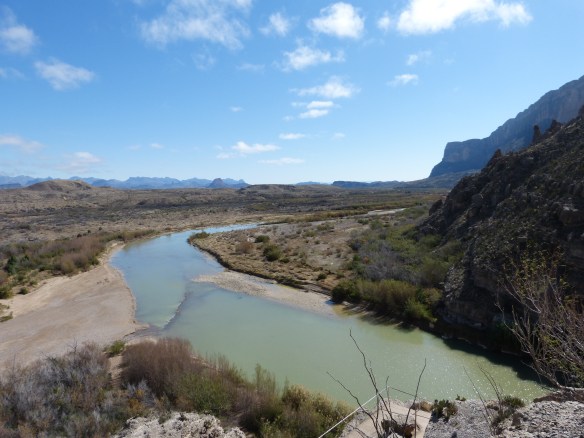 If we wanted, we could have waded across the 20 to 30 yards of mostly knee deep water to Mexico. So much for all of the hysteria about fencing off the US from Mexico. Those walls of rock are probably the most effective barrier of all.

A steep narrow path winds into the canyon up from the beach. In just a few minutes we were almost surrounded by steep rock walls and silence, except for the burble of the water. We didn’t run into any one else until we were heading down the path back to the beach. The total length of the hike across the beach and into and out of the canyon is less than two miles. After lunch at the Chisos Mountain Lodge, Katherine and I went on the 5.6 mile round trip hike to the “Window,” where the stream the trail follows funnels into a narrow tree-shaded canyon, then drops off into the desert below. The trail is steep, dropping almost 1000 feet from the lodge to the window (starting at the campground cuts the elevation drop in half and the distance by about a third). 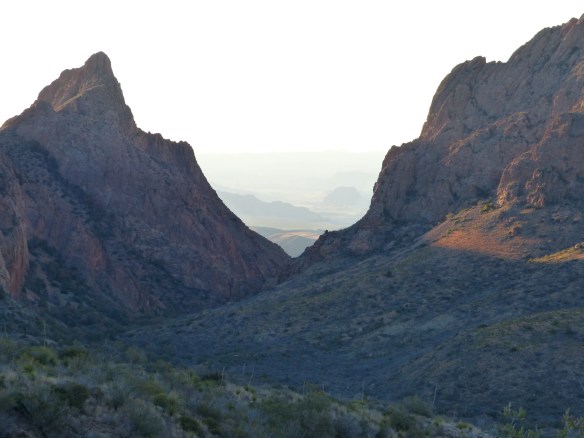 I inched up as close to the Window as I dared on the slick rock and could see the desert many miles away and almost 2000 feet below. The hike back to the lodge was pretty strenuous. It had taken us almost 3.5 hours and it was almost sunset. We showered, took a few photos of the sunset, had dinner at the lodge, then read in bed until we fell asleep at 10:30. 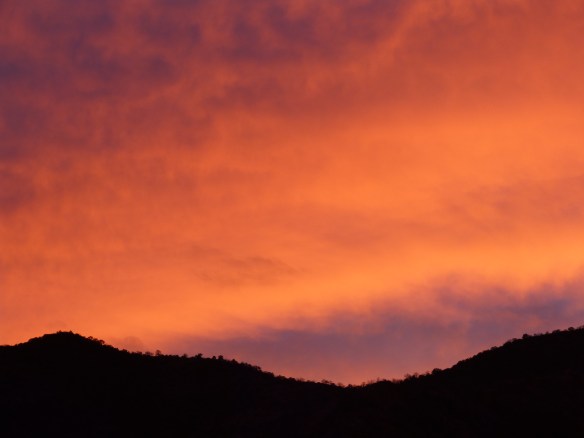 It was a great day that reminded me why I return to this place every 15-20 or so years. I hope I live long enough to make it back here at least once more. By then, if I’m still around, I’ll probably have a new set of knees, though I’m not sure if I’ll make it all of the way to the Window.