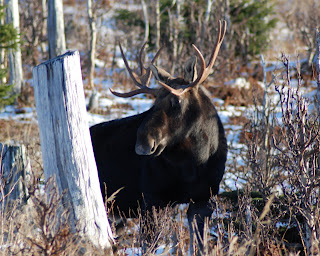 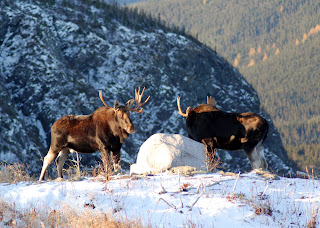 (photos by Eric Brodnax)The clang of crashing antlers echoed through the clear, cold mountain air as two huge moose butted heads just 50 yards away in the early morning sun peeking over the ridge in front of us. This was our reward for getting up at 5 am to hike a steep two uphill miles to this moose playground/battleground in the heart of the Gaspe Peninsula in the southeast corner of Quebec. It was the last day of our “familiarization” trip hosted by local tourism boards and tour companies to promote this relatively easy-to-get-to region that is as rugged as it is civilized.
While I watched this amazing wildlife tableau play out before me, I was still digesting my gourmet meal from the evening before – possibly the best smoked salmon I have ever had, a spicy clam and crab soup, veal in gorgonzola sauce, and a decidedly decadent chocolate mousse. Such is life on the Gaspe Peninsula — wilderness and nature plus French food and culture without the inconvenience and expense of a trans-Atlantic flight.The trip began with an afternoon canoe trip down the Bonaventure River on the southern coast of the Peninsula. The sky was clear and the air was brisk as we paddled down the fast flowing river and bounced through the benign rapids. There were just enough rocks and ripples to make it interesting. Our paddle ended as the setting sun turned the few wispy clouds into rosy streaks across the sky.Our reward for braving the “wild” waters of the Bonaventure was an outstanding dinner, prepared and served by our hosts from CIME Aventures (www.cimeaventures.com) in their rustic but comfortable ecolodge — grilled codfish in a miso marinade, soup made from oranges and root vegetables, beet salad with a ginger, garlic and Dijonnaise seasoning, barbequed salmon marinated in maple syrup and served with rice, almonds and cranberries, vodka and Malpèque oyster shots, and homemade apple pie. We were really roughing it! By now we were thoroughly immersed in the charm of the region — the yin-yang combination of nature and French culture, especially the food.

Day 2 was more rigorous. After a drive of several hours to Gaspesie National Park in the interior of the Peninsula, we embarked on an 8 mile hike on the international extension of the Appalachian Trail in the Chic Choc mountains, guided by our hosts from Absolu EcoAventure (http://www.ecoaventure.com/). The trail snaked up and down over rocks and tree roots and — since it was mid October, at the very end of the tourist season — through patches of ice and grainy snow. We covered a total elevation gain of less than 1000 feet, but the ups and downs made it seem higher.

The views from the cliffs, outcroppings and the rocky mountain tops were well worth the effort. The Appalachians are one of the oldest mountain chains in the world. Originally thrusting 40,000 feet above sea level, they have been worn down by 480 million years of wind and rain, giving them a soft, rounded, ancient look. The view over the rolling, tree-covered hills and snow-dusted ridges and through the wide valleys to the St. Lawrence River evoked ancient connections and primal memories. I felt like I was looking at my prehistoric history, when my cellular ancestors were brewing in the vast waters of the earth, perhaps even in the very body of water I was looking at that very moment.

After the hike we checked into the picturesque Gite du Mont-Albert, a four star hotel with a zillion star restaurant in the heart of the park. Just as the gourmet meal and fine wine started to lull me into a relaxed sense of well being, our guides announced the plan for the next day – a well-before-dawn wake-up call to hike up a short but steep trail to watch the sun rise, and if we were lucky, see a couple of moose frolicking in their natural environment.

Only about half of us made the early morning wake up call. I was glad that I did. Watching those two moose bang antlers in the soft glow cast by the rising sun was pure magic. We saw over a dozen moose that morning – at least three adult males with big sets of antlers and several mothers with their kids. The setting was also spectacular – trees, rocks and rolling snow-covered hills with not a sign of civilization in sight other than the trail, a simple wooden viewing platform, and a handful of other, early rising hikers. There were also no sounds other than the clanging of the antlers, a high pitched keening from the youngsters, and our excited but hushed whispers.

As we descended the trail to head back, I stopped to gawk at one male with a big rack (not a phrase heard often in everyday life) just a few yards off the trail. When he started to move in my direction, I decided that it was time for me to also move, in the opposite direction. I’ve seen moose before – mostly in Newfoundland by the side of the highway – but rarely in their natural environment like this.

From there on, it was all downhill – literally. The hike down was easy and fast. We got back to the hotel in time for a fast cruise through the breakfast buffet and one last chance to immerse myself in the gustatory delights of the Gaspe Peninsula (with apologies to Homer Simpson, “hmmm, crepes, hmmm”). Then we hit the road. Since we had to catch a ferry to take us across the St. Lawrence, there wasn’t enough time for another leisurely gourmet meal, so we made a quick stop at a local market on the way. My knowledge of French, which consists of little more than “bon jour” and “merci,” (I pronounce it “mercy”) limited my choices to an already prepared, “to-go” sandwich of brie and beef on a crusty French roll topped with sautéed peppers. Somehow, I made do.