The old man’s eerie monotone chant rose into the star-speckled sky, along with the embers from the large bonfire. He beat on the drum under his arm as the crackle of the fire provided counterpoint. The shadow of the flames flickered against the wall of the jungle surrounding us. 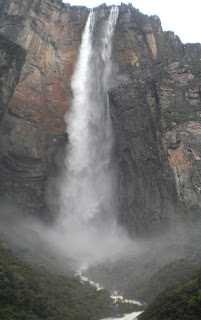 We were in a camp on the edges of the village of Kamarata in the remote reaches of SE Venezuela. Kamarata is one of the principal villages of the Pemon people, the indigenous Amerindian people of the savannahs and tepuis (table top mountains) for which this region is known. This was the first day of our 4 day river trip to the legendary Angel Falls, the world’s highest waterfall at over 3000.’

My wife Katherine and I were invited here by the owners of the tour company Venezuela Elite (http://www.venezuelaelite.com/) to “show Americans that there is more to Venezuela than Hugo Chavez and Miss World.” We only visited Canaima National Park in our two week trip — particularly Auyan Tepui , the Gran Sabana and Angel Falls — but from what we saw in those 16 days, their claim is well justified.

During the first eight days of the trip I trekked up, on and down Auyan Tepui, the largest of the table top mountains in SE Venezuela (see http://www.yourlifeisatrip.com/ for an account of that trip) while my wife, Katherine, toured the Gran Sabana. For the remainder of the trip we would ride in a “curiara,” an indigenous dugout canoe, to Angel Falls.

Before heading to Angel Falls, the plan was to spend a day with the Pemon people of Kamarata, a village in the heart of the park. Although all of the porters on my trek were Pemon, this would be the first opportunity to meet them where they lived.

We spent much of the day watching a woman make casaba, the cracker-like staple made from the yucca plant. We ate it hot off the grill while it was still chewy and moist with home made kumachi, an indigenous hot sauce that is as fierce as anything this chile-loving chowhound has ever eaten.

While watching and munching, I talked, via translation by our guide, with the woman’s husband, a teacher, about his and his colleague’s efforts to preserve their traditional culture – making casaba and pottery, practicing traditional medicine, and preserving the stories and songs that are the heart and soul of their oral tradition. The setting — the backyard of his home with his wife making casaba, his young daughters playing, and the savannah, tepuis and waterfalls as background – made the experience seem even more intimate. I felt completely immersed in the moment and the place.

Our cultural immersion continued with a visit to another house to watch a woman, a locally renown potter, make a bowl in the traditional Pemon method and style. The day was capped off by a barbeque with the porters from my Auyan Tepui trip, who all lived in or near the village, and the haunting, strangely moving singing of the “old man” (at 66 he was two years younger than me!). We went to sleep in hammocks with mosquito netting under the thatched roof of the churuata, an open sided indigenous hut. This was our first of four nights sleeping in hammocks. It took a while to get used to it, but I eventually drifted off and slept like a baby.

For the next two days, nine of us, including a 4 man boat crew, made our way down the Akanan and Carrao rivers in a sturdy dugout canoe with, in the only apparent concession to modernity, a large outboard motor. Other than three other canoes, without outboard motors, and an occasional churuata, there were few signs of “civilization” on or along the river. But we did see swarms of butterflies and lots of birds including cormorants, parrots, toucans, kingfishers, egrets, vultures, hawks and swifts.

We usually made camp by lunchtime. Campsites were rustic, but roomy and comfortable. The thatched roofs of the churuatas shielded us from the sun and rain. We had the campsites completely to ourselves. Late in the afternoon, as the storm clouds built up on the tepuis, the guides served us hot tea and snacks. We watched the late afternoon downpours from the comfort of our churuatas.

The second campsite was my favorite, a spacious pavilion situated about 20 feet above the river with a large, almost luxurious covered deck. We spent most of the afternoon on that deck gazing at the panorama before us — the river and jungle, of course, but especially the majestic tepuis on both sides of the river including the one I had climbed just a few days before, Auyan Tepui.

We were close enough to see cracks in the 3000’ sheer rock walls that jutted out of the jungle. They looked, in Katherine’s words, like “the ramparts of massive prehistoric castles” – dark, gothic, and imposing. Wildly shaped clouds swirled around the tops, and the waterfalls looked like pencil thin lines of white against the black rock. I counted at least 15 waterfalls. We sat there for hours, reading, scanning the tepuis and waterfalls through our binoculars, and watching a cormorant silently skim the tree tops in front of us.

The last full day of our trip featured a wild ride up the Churun River to Angel Falls. The walls of Auyan Tepui closed in around us as we neared the falls. We headed into the mouth of a narrowing canyon, bashed against the current through the rapids and skirted the huge boulders that had thundered down over the years from the walls of the tepui. We saw many waterfalls along the way. Then we caught a glimpse of the big one. Angel Falls in all of its vaunted vertical glory loomed through a break in the trees across the river as we pulled into camp.

After setting up camp, we ferried across the river and hiked through the jungle, then up a steep rocky trail to the overlook for a full frontal, top to bottom view of Angel Falls. It was less than a kilometer away, but it’s full-throated presence made it seem much closer. We not only heard and saw it, we felt it — the spray, of course, but also the wind from the air displaced by the plunging water. We leaned back and tracked globes of water as they fell from the top of the falls until they vaporized before reaching the bottom. We sat there held in its thrall until we were cold and wet, then lingered a few minutes more.

Back at camp at sunset, we sat and watched the sky change color above the falls, listening to the exotic cackle of parrots across the river. An hour later we fell asleep to the music of its distant roar.