For the three days of Songkran, the traditional Thai New Year’s celebration, the entire city of Bangkok turns into one huge water fight. 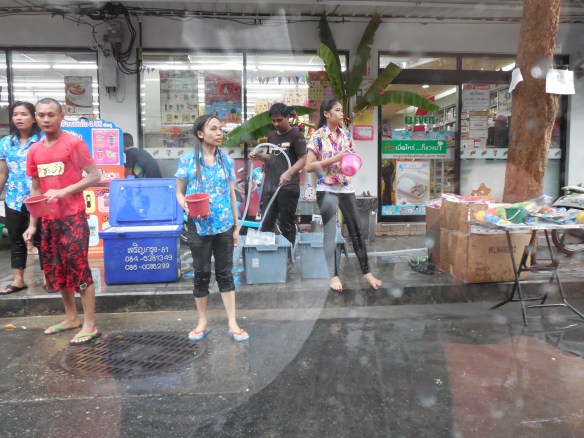 The day started with a sumptuous breakfast buffet featuring a large array of Western, Thai, Chinese, and Indian dishes. To do my part for world peace, I ate my way through several continents, eating as much as I could, hoping to make it last until dinner. After breakfast I worked for a couple of hours while the bowling ball in my stomach digested. When I was finally able to put on my gym shorts, I worked out in the hotel fitness center, then jumped into the pool to cool down. Little did I realize, I was getting ready for Songkran.

I met Thip at 2 in the lobby lounge to go over the latest draft of her dissertation. Once that was done, it was time for a little fun. Just down the river from the Chatrium is Bangkok’s version of the commercial developments that have revitalized waterfronts in many American cities over the last couple of decades. Asiatique, as it is called, is part upscale shopping center, theme park and river walk. In the old days it was a bustling international river port, then fell into decline. Now the formerly abandoned warehouses and factories on the site have been remodeled and converted into a wide variety of upscale shops, restaurants, cafes and bars. The site also includes food stalls, a night market, ferris wheel, riverfront promenade, theaters, and a pier for the boats that ferry people between Asiatique and several hotels and the Sathorn Pier, adjoining the Saphan Taksin Sky Train station, just 10 minutes away. 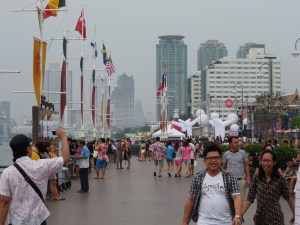 Thip drove the mile or so from the hotel to Asiatique, but we could just as easily have taken the hotel ferry to Sathorn Pier, and the Asiatique ferry from there. But by driving I got my first taste of Songkran madness in Bangkok.

The roots of Songkran are religious, marked by the dousing of people with water to spiritually cleanse them. Since it happens during the hottest part of the year, the dousing is usually welcome by the “dousees.” Over the years it has evolved into huge, generally good-natured water fights throughout the city. Another key element of the celebration is the smearing of colored powder on the faces and bodies of passersby. 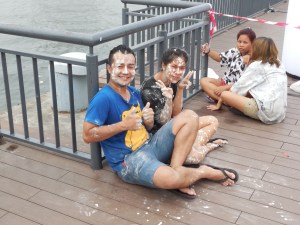 As we drove down the road to Asiatique I could see groups of people on the street corners with large barrels of water, bowls, and high capacity water guns spraying cars, tuk-tuks, and motorcycles driving by. If our windows had not been shut, I would have been soaked by the time we arrived. 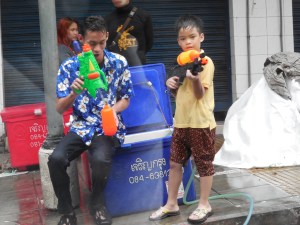 As we wandered through the crowds, I could see little kids with water pistols eyeing me. I was one of the few Western tourists in the complex. Besides I’m large and have a white mustache, which seems to attract the attention of kids in all cultures. I could tell that they were tempted but holding back, waiting for a sign that it was OK to spray me. Once I looked at them and smiled, it was game on. 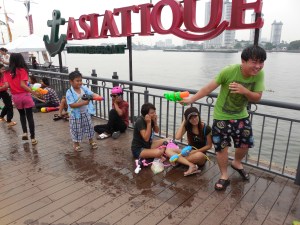 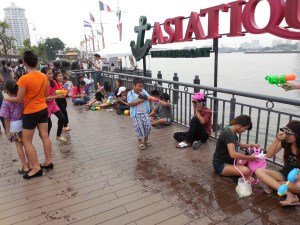 After a while Thip had to leave for a family celebration, but I decided to stay. Despite the occasional spraying, I was still hot, so I was happy to find a bar with the promising name, Brew, with an impressive collection of beers from around the world, including some of my favorite West Coast IPAs from California. 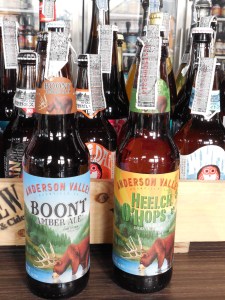 I spent the next two hours drinking and talking to Hans from Denmark, who wandered in for a beer break while his wife and daughter shopped. He turned me on to his favorite Danish IPA, Mikkeller. It was excellent. 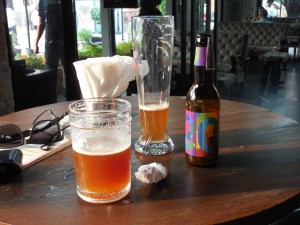 I could have walked back to the hotel, but I had enough dousing and opted instead for the ferry. As the ferry pulled into the Sathorn Pier there was a long line of people waiting to get on. Only half made it before the boat reached it’s 100 person capacity. I guess Asiatique really rocks at night.

As I waited for the Chatrium ferry I had a chance to observe the water weaponry up close. 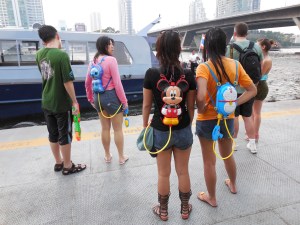 A number of wet Brits with water guns boarded the hotel ferry with me and continued to spray each other throughout the 10 minute ride to the Chatrium dock. As we disembarked, they finally turned their attention to me. By the time I got to the air conditioned lobby I was soaked…again. 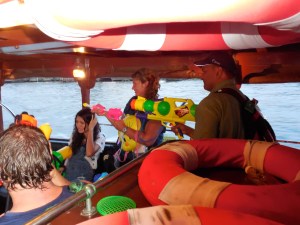 I headed to my room, peeled off my soggy clothes, and slipped into my robe. It was a long, wet day and I was ready for an evening of room service and another installment of the latest saturation news coverage from CNN.