Stories from my first trip to Ireland: Part 4 of 5 — The night was still young and I had a lot more drinking and schmoozing to do. We moved to another pub, smaller, less crowded, more intimate. After sitting down at the bar and ordering drinks we started chatting up three lasses seated nearby. I thought we were doing well until the bartender, even more garrulous than your average Irishmen and obviously trying to help, tells them that we are Americans. They quickly downed their drinks, gathered their things and made for the door.

The bartender explained: American men had bad reputations with Irish women. We had only one thing in mind, they thought, and it had nothing to do with a pleasant evening of drinking and chatting.  I guess I couldn’t blame them for that, though an evening of chatting and drinking would have been fine with me.

As I drank, I watched a high-spirited, mischievous boy of about 6 or 7 with an angelic smile and dimples to match run around the pub. He was a charmer, engaging with everyone including the disreputable strangers from America. Several adults, clearly his family, watched him with smiles on their faces. I could almost feel their affection for the little imp.

Soon, they were talking with John, Ralph and me and treating us like part of the family. Someone took out a Polaroid camera (remember them?), took a picture and gave it to me, the only photo I have of that trip. John the bartender is on the left; John, the American recent prep school graduate is next to him, and Ralph is on the right. I’m the one with the scruffy beard.  And of course, our little friend is in the front. 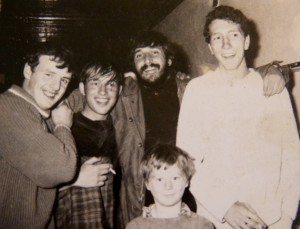 At one point I ran low on money and was ready to head back to the hotel for the night. They would have none of it, thrusting one pint of Guinness after another at me to make sure that I stayed and didn’t sober up.

After a while I was talking with the imp’s uncle, a compact, powerfully built man in his 30s.  They were a family of tinkers, he told me, Irish gypsies now known as “travelers.”  He was not born a tinker, but married into the family a few years before.  It was not an easy life. Most Irish scorned them, he explained with emotion written all over his face, and viewed them with great suspicion.

But they were a warm, loving people. I could see that in the way they treated each other and me. And he was a proud man. I’ll never forget the image of this brawny man, with his muscles straining the seams of his frayed suit and tears in his eyes, as he tells me about his love for his tinker family, the hard life they had to live, and his own noble history, of his uncle killed by the Black and Tans (an English paramilitary group sent to Ireland in1920 to fight the IRA) on Bloody Sunday.

I had never experienced anything like that before, the raw emotions of a proud man living a difficult life. He touched me deeply, and my memory of that interaction is as vivid as a 44 year old, alcohol-tinged image can be.

I stayed in the pub, drinking, talking, but mostly listening and watching, until it closed at dawn (special hours for the Puck Fair).  My crazy week and a half in Ireland was coming to an end. Soon, I would be off to Belfast for more emotion and even more history, history that would be far more monumental than I could imagine in the early morning light of this far, festive corner of the Emerald Isle .