“Wats” that you ask? Puns, alliterations — the heat-induced insanity continues. 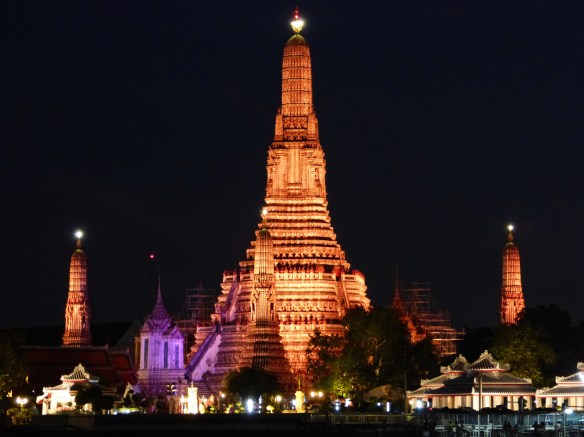 That’s a wat, a Thai temple — Wat Arun to be exact. 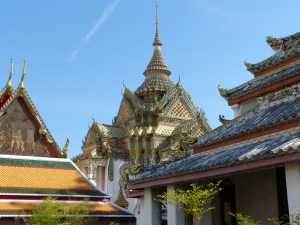 That’s Wat Pho, the oldest temple in Bangkok with one of the largest reclining buddhas in the world, and the site of the first Thai massage school. Its also right next door to the most popular tourist destination in Bangkok, the Grand Palace and Wat Phra Kaew, probably the holiest temple in Thailand.

Wat Arun is right across the river from Wat Pho. Not quite as old, but pretty old. Its also famous because of its architectural style — in Wat Arun’s case, Khmer. Wat Pho is more traditionally Thai.

If its not too hot and you have the energy, you can visit all three in a leisurely but sweaty day. (Leisurely does not mean easy — I’m referring to the pace, not how tired you’ll feel from being out in the sun and heat all day).

You take the Chao Praya boat to the Tha Tien Pier (about 5-6 stops up river from the Central Pier at the Sathon-Taksin BTS [Sky Train] stop). 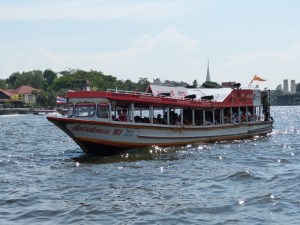 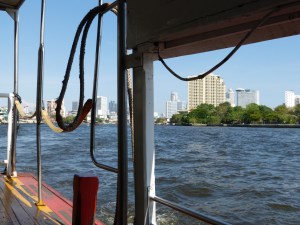 Walk about a block to the entrance to the Grand Palace (I use this expression to include the temple buildings that are part of the overall site), ignoring all of the touts and tuk-tuk drivers telling you that it is closed for lunch or because its a Buddhist holiday. Its a scam. They’re trying to get you to visit tourist trap stores selling jewelry, silk, and other stuff.

After walking around the grounds for a couple of hours (long pants and covered shoulders required — you can rent appropriate attire there if you prefer), you can walk a very long block (about half a mile) to Wat Pho. An hour or two is all you need, unless you decide to get a massage at the famed massage school (this is not a relaxing, serene experience). From the Tha Tien pier, which is only a block from Wat Pho, you can take a ferry across to Wat Arun, walk around for a while and climb up the steps to the main stupa (steeple), then take the ferry back across the river and catch the river boat back.

My plan was to skip the Grand Palace, which I have been to numerous times (besides I didn’t want to wear long pants), and head right to Wat Pho, my favorite site. There are two reasons its my favorite. One is the reclining Buddha, about 160 feet long, one of the longest in the world. I have seen it numerous times, but I never tire of walking slowly around the Buddha and looking at it from every conceiveable angle. Its very impressive! 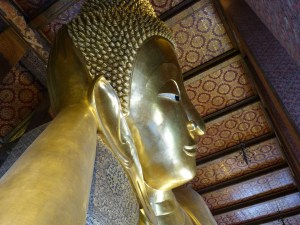 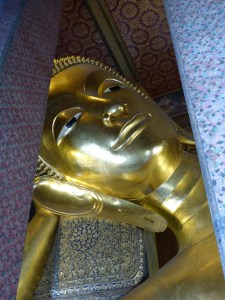 It takes some patience to get the right photo. You have to wait until all the other tourists move out of the way after they have had their photos taken with the Buddha in the background. BTW, I’ve never quite understood that desire. There is no photo of a beautiful view, site, building, monument, etc. that is improved by my standing in front of it.

The other reason I like Wat Pho is that it feels more casual, the kind of place you would go to if you were a local. The Grand Palace is very beautiful and not to be missed, but its almost all tourists, many wearing the heavy, baggy looking pants you have to rent to cover your exposed legs.

I planned on heading to Wat Pho in the middle of the afternoon, check out the reclining Buddha and find a quiet, shady spot to sit and kill an hour or so, contemplating nothingness and the here and now, etc. (not something I’m much good at). When it started growing dark, I would head to the river for a view of Wat Arun, lit up against the darkening sky.

Well, my timing was a bit off and I overestimated my capacity for quiet contemplation (again!), so had almost two hours to kill until sunset. I started wandering among the narrow streets, keeping in the shade as much as possible, looking for an air conditioned bar. I wandered down a narrow alley toward a peephole view of the river between the crammed together buildings, shops and stalls that seemed to prop each other up.

Near the end of the street, just a few yards from the river, I spotted a very hip looking bar/restaurant that would not have seemed out of place in a hip, soon-to-be-gentrified neighborhood in Brooklyn, downtown LA, or south of Market St. in San Francisco. 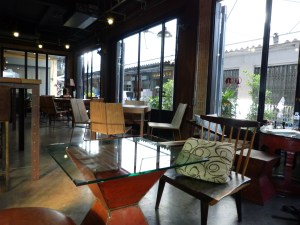 It was located in a boutique hotel, Inn A Day, just across the river from Wat Arun. The decor was interesting — a former factory turned into a modern Thai version of early 20th Century industrial — the AC was strong and the beer was very cold. I decided to wait here until sunset.

And the food was excellent, a lighter, more complex and subtle version of traditional Thai cooking. I had no trouble killing time as I ate a “stir-fried crispy calamari with special egg yolk, cashews, garlic, scallion and chiles” plus a very spicy “green curry with chicken, Thai eggplant, pea eggplant, carrot, basil, coconut milk and green chile paste.”

After I finished eating, the proprietor invited me to sit on the third floor terrace to take photos of Wat Arun against the darkening sky until the illuminated stupas were finally framed in black. 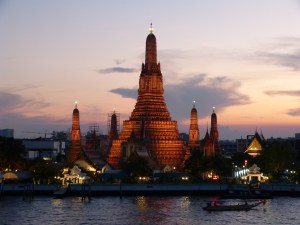 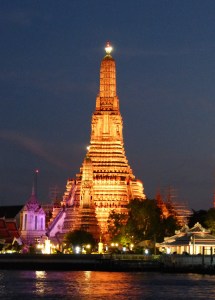 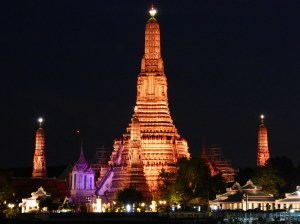 Mission accomplished — with no apologies to George Bush — I headed back to the Chatrium for my last night on the river.

1 thought on “The Day of the Wats”