Eating pizza in Buenos Aires, the land of empanadas and humongous slabs of beef? That may not be how you would expect a walking-eating tour to begin in this, the most cosmopolitan city in South America. 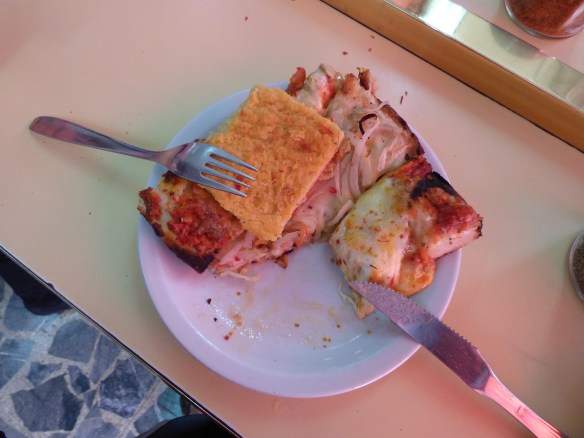 But I get ahead of myself. Pizza was how the last day of my recent three days in BA began, but the first day was perhaps a bit more conventional.

The tour — arranged and conducted by the South American tour company, Say Hueque —  actually started the evening before when I checked into my boutique hotel in Palermo Soho, named after the neighborhood in Manhattan it most closely resembles — hip cafes, restaurants, bars and shops, several to a block on streets lined with trees and quaint townhouses.

My hotel, the L’Hotel, is more mews than hotel with three floors of rooms overlooking a cobblestone alleyway overgrown with hanging vines. Plus a breakfast room and garden in the rear of the hotel. 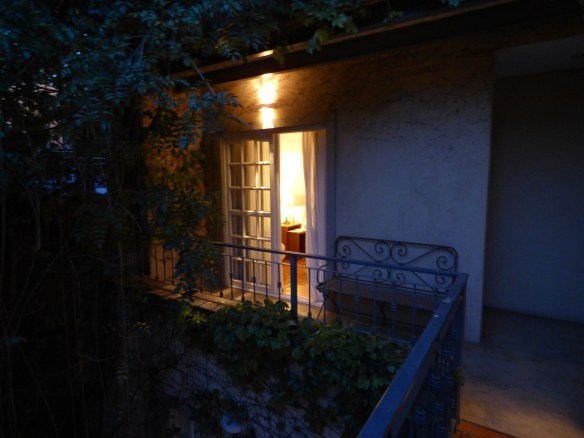 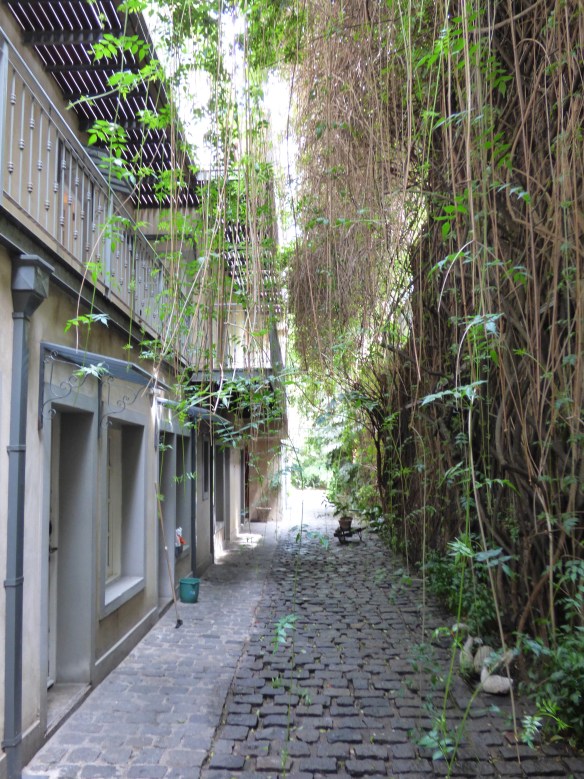 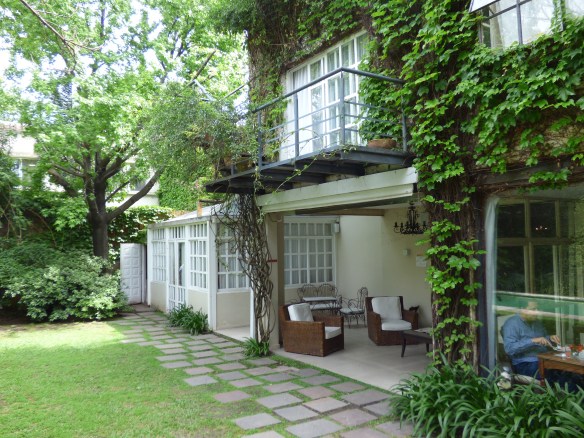 The next morning, Vanesa from Say Hueque met me in the lobby, then ushered me out to a sleek, air-conditioned Mercedes with a driver waiting just outside the entrance to the hotel.

For the next several hours we toured the highlights of the city, including the historic core, 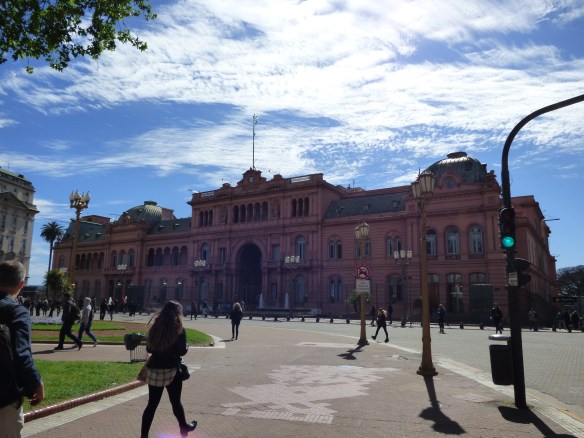 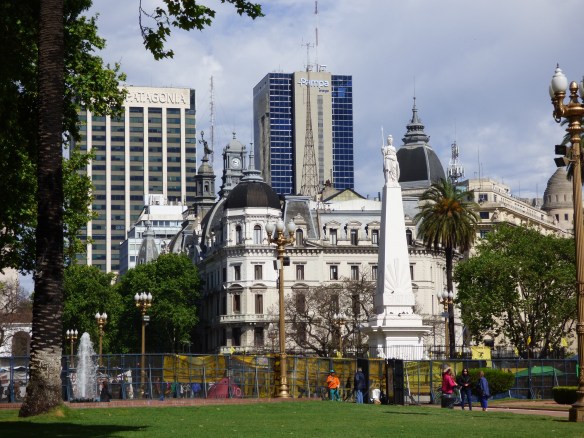 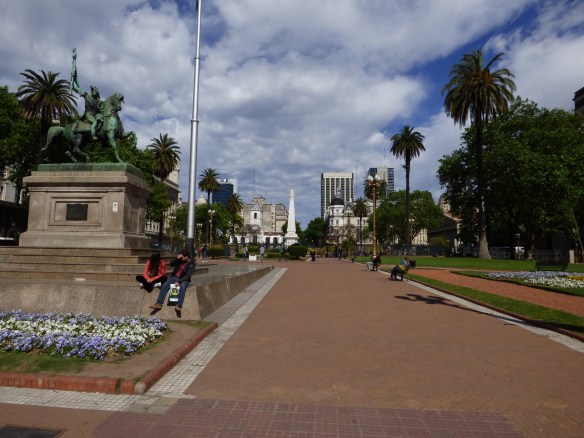 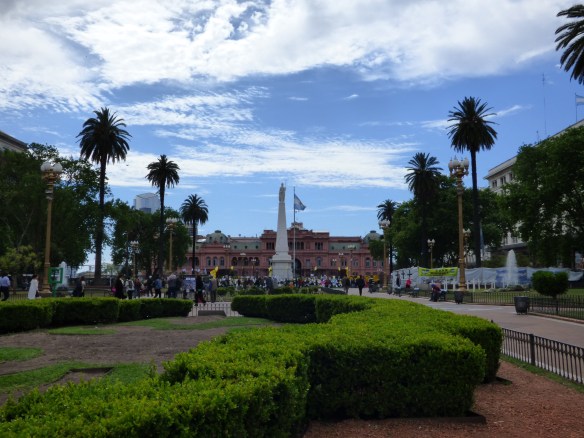 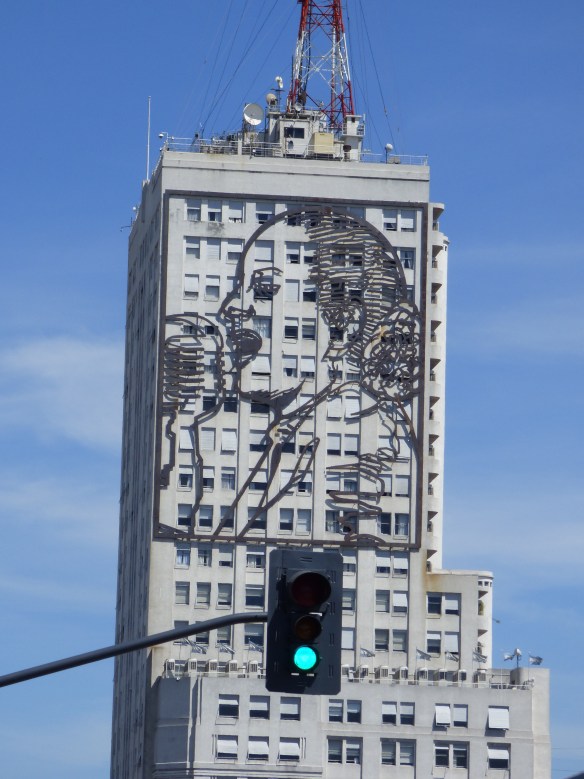 plus the cathedral where Pope Francis resided before he was Pope. 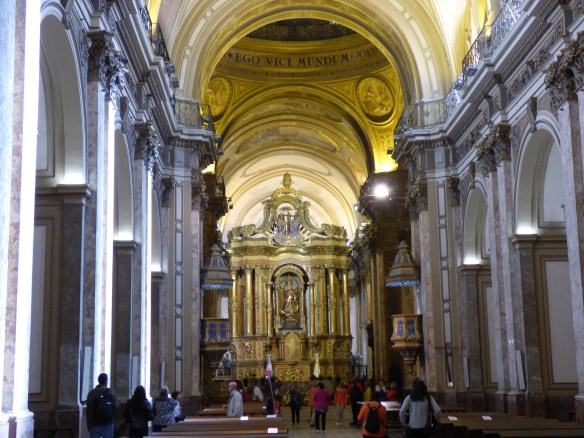 We then walked up a main drag to visit the Cafe Tortoni, one of the 73 “notable” and historic cafes protected by the city from demolition or modifications that might detract from their historical character. 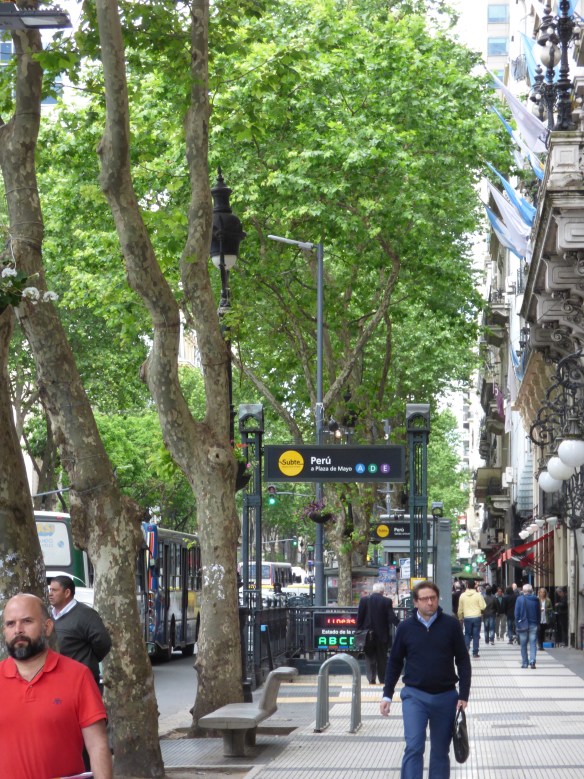 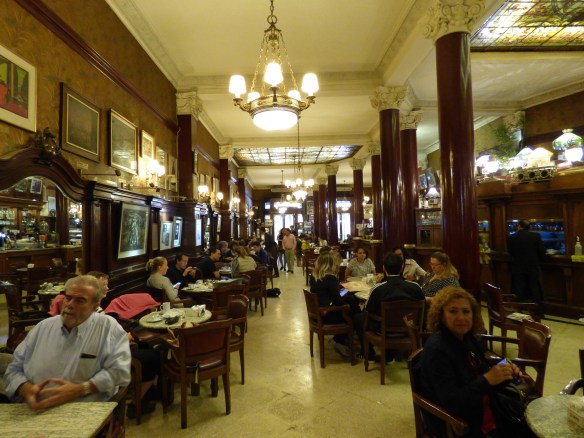 Our next stop was the Teatro Colon, considered one of the best theaters in the world for its size, acoustics, beauty and history. 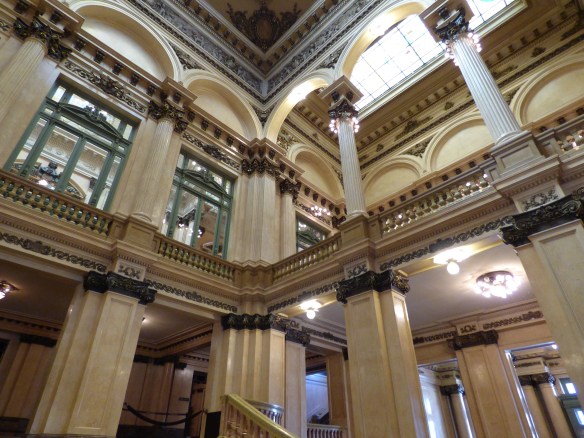 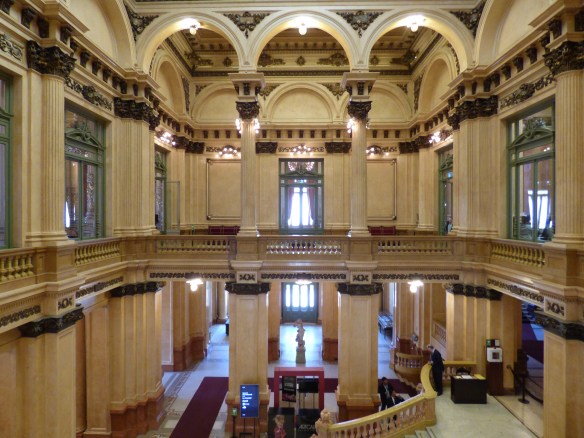 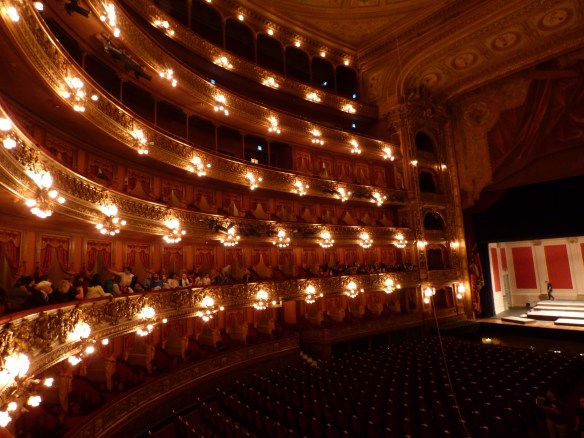 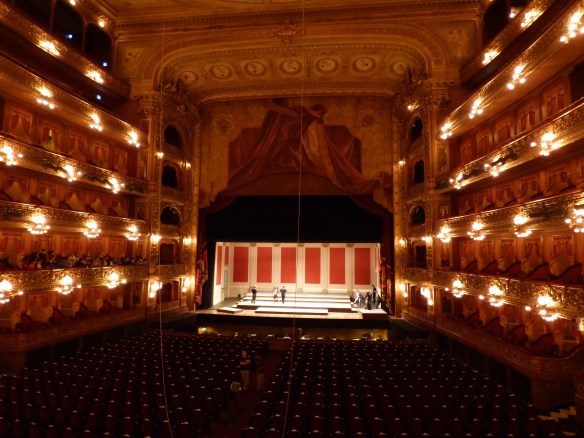 From there we went to the historic San Telmo Market, which was somewhat empty because it was an Argentinian holiday, 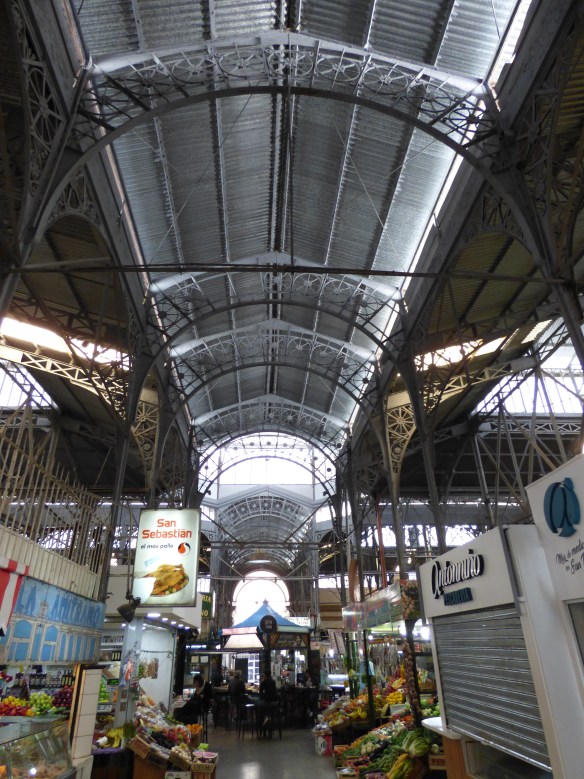 then to La Boca, the colorful (literally) neighborhood where Buenos Aires began. La Boca is also the home of the Boca Juniors football (soccer) team and what may be the most rabid football fans in South America. Unfortunately, there was no game that day so I didn’t get the opportunity to observe that particular slice of South American lunacy. Or maybe I should consider myself fortunate to get out of La Boca with all my teeth. 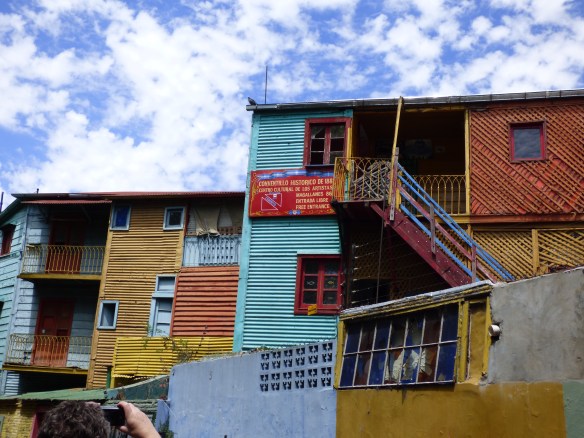 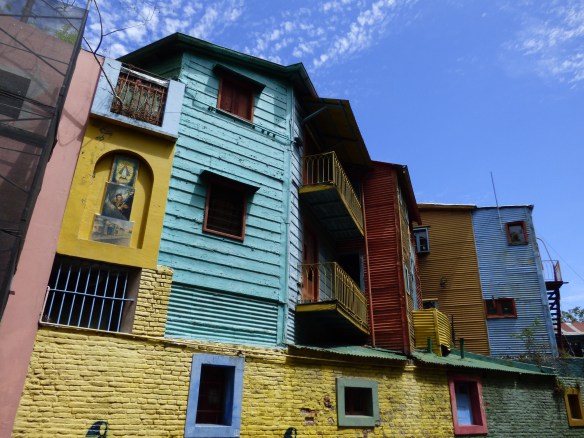 The tour ended with an obligatory visit to the historic (I know, I’ve used that expression a lot, but its appropriate) cemetery where Eva Peron is interred. 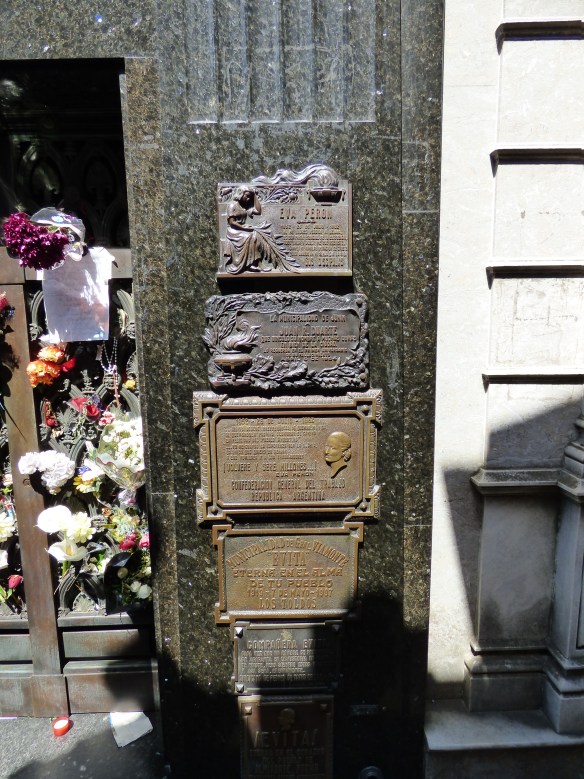 After being dropped off at my hotel, at Vanesa’s recommendation I wandered down the street to Chori for lunch where I had one of the best sausage (they call it chorizo) sandwiches I’ve ever had. It was comparable to the sausages at the legendary Jodi Maroni’s on Venice Beach, a favorite haunt of mine when I’m home.

Vanesa also recommended the famous restaurant La Cabrera, just two blocks from the hotel. I went there for dinner after I had fully digested lunch and ate one of the largest and best steaks I have ever had. A bit pricey by BA standards (but not Los Angeles standards) but well worth it. I did the best I could but still left a few bites on my plate, which will shock those of you who know me. I did my best but I was seriously stuffed. Fortunately I only had to waddle two blocks to get to my hotel and plop into bed (and watch the Eagles destroy the Redskins on the Spanish broadcast of Monday Night Football).

The next day I was on my own until the evening. In a desperate attempt to walk off the several pounds of red meat I had consumed the day before, I took a long walk to explore the Recoleta neighborhood a few blocks away and the Botanical Gardens and park nearby. 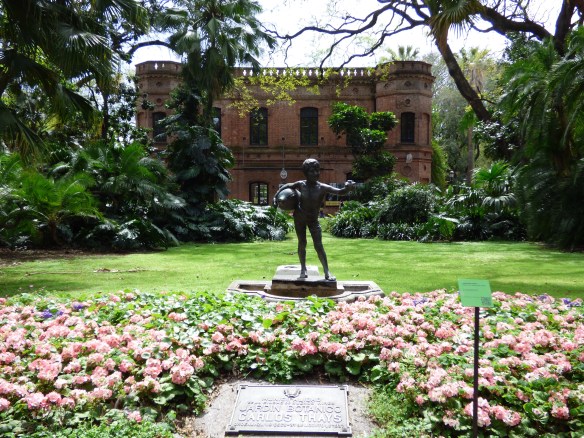 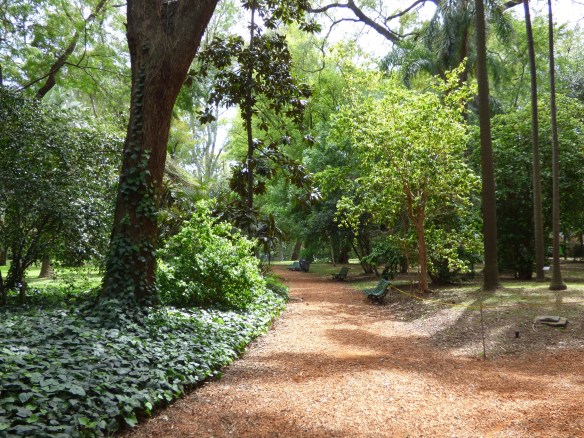 Recoleta is quite up scale, with many modern high rise apartment buildings mixed with townhouses, fancy shops, cafes and restaurants.

In the evening I went to a tango show at Esquina Carlos Gardel in the Abasto neighborhood of BA (arranged by Say Hueque). My tastes in music run to the screeching, inaccessible jazz of such avant gardists as Ornette Coleman and John Zorn (who makes Ornette sound like Burt Bacharach), so I’m not a big fan of the mannered, ultra romantic music and dance of tango. But this show was really good! I especially liked the music, performed by a live band of several musicians. The show also included dinner which did not compare with the steak at La Cabrera but did serve to fill up the gaping maw created by the huge chunk of meat I tried to consume the night before.

Speaking of eating, which I often do, the last of my three days in BA featured a walking/eating tour, designed by Vanesa, in the neighborhood of the Avenidas Corrientes, the Broadway of BA. We started with the pizza at the famous Pizzeria Guerrin. 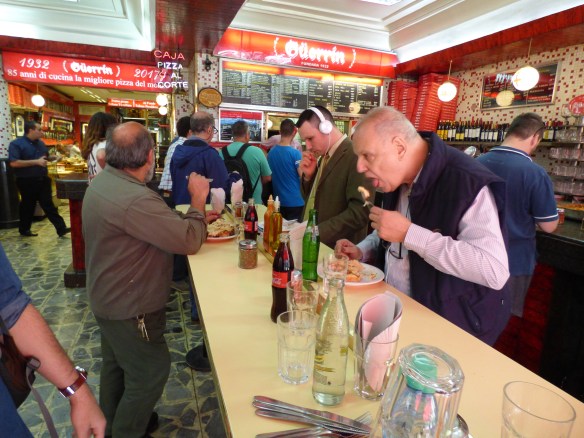 Argentinian pizza is thicker and cheesier than New York pizza and is topped with a thin, dense baked dough of chickpea flour and salt.

It was all I could do to keep from eating everything on the rather generous plate that Vanesa gave me so I could save room for the churros and chocolate at La Giraldi, 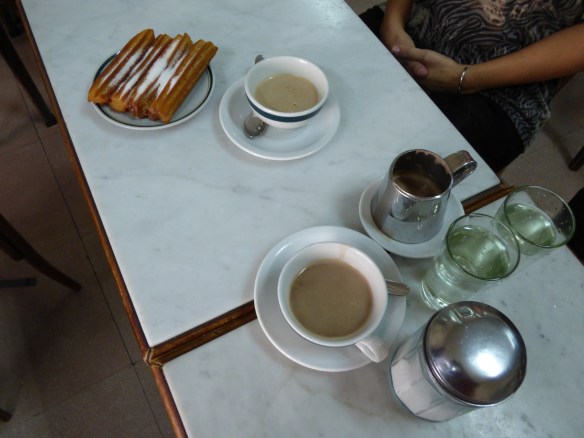 and the gelato at Cadore, possibly the best gelato I have ever eaten. 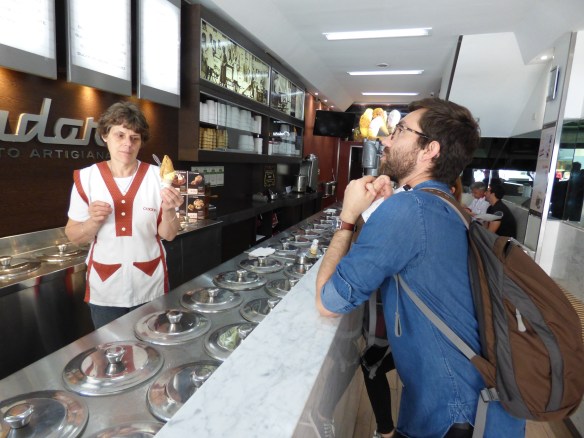 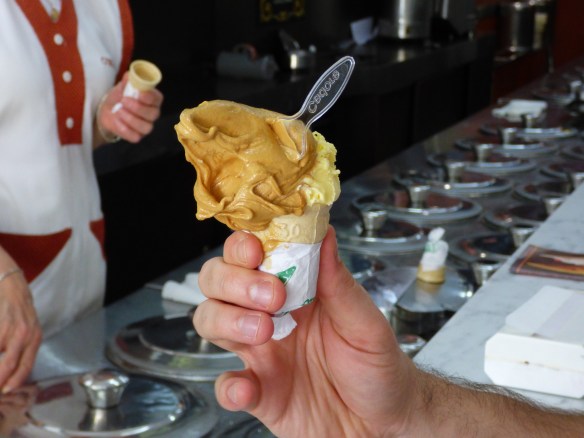 When my nose wasn’t metaphorically buried in my food, I had a chance to admire the mix of Spanish, French and Italian architecture of the neighborhood as well as the many “notable” cafes, including one with a billiard parlor, along the way. 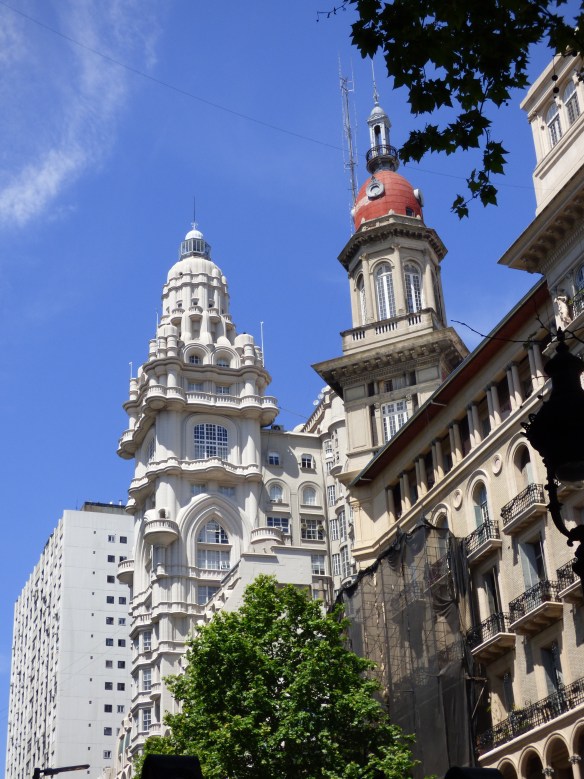 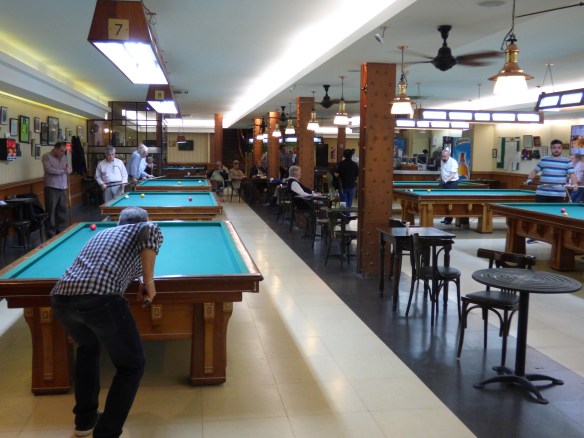 Throughout the tour Vanesa described the Spanish and Italian influences on the gastronomy and architecture of Argentina and BA, but to tell the truth I was distracted by the melting gelato dripping on my fingers and the bloated feeling in my stomach. I guess I’ll have to take this tour again….